Whether you move freight in California or not, you’ve likely heard about a recent piece of employment legislation that could change the transportation landscape.

Government regulations often have a major impact on the supply chain, but it’s rarer that an employment law in an individual state is this much of a game-changer.

But there’s been a lot of news spanning many months on this topic, so we put together this AB5 deep dive to get a clear, easy-to-digest review for logistics professionals.

What You'll Learn in This AB5 Deep Dive:

What Is the AB5 Bill?

Assembly Bill 5 (or “AB5”), passed by the California State Legislature and signed into law by Governor Gavin Newsom in September 2019, effectively reclassifies large numbers of workers in the state as employees rather than independent contractors.

Initially championed by labor unions throughout California as a way to bring employee benefits to the gig economy, AB5 replaces an existing standard for classifying workers.

AB5 has a new, 3-point “ABC test” where a worker is assumed to be an employee unless they meet each of the following three criteria:

While this regulation is not the only one structured this way in the U.S. (many states use a similar “ABC test” to determine worker classification) it is the strictest and hardest to pass.

At issue specifically is item B, particularly for California-based truckers.

Most other states with ABC tests only deny independent contractor status if workers regularly perform their work in the same location.

By tying the test to “the usual course of the hiring entity’s business,” however, AB5 has created a much higher standard for employers to classify a worker as an independent contractor.

Are Trucking Companies Included in AB5?

Whether or not AB5 applies to the trucking industry was a topic of heated debate — and a series of court cases.

There was a federal injunction exempting trucking companies from AB5, however, on June 30, 2022 the injunction was lifted when the Supreme Court of the United States declined to hear the case.

In short:
Yes, trucking companies are included in AB5.

From initial passage of the bill in 2019 until July 2022, they were not included based on a federal court injunction.

When the Supreme Court of the United States declined to hear the case (AKA granting a Writ of Certiorari), the Appellate Court's ruling upholding AB5 took precedence and the injunction was lifted.

Why Does It Matter if AB5 Applies to Trucking Companies?

AB5 could fundamentally reshape the way carriers and drivers do business in California, and it could be a sign of things to come throughout the rest of the country.

Motor carriers operating in California now have to:

As full-time employees, trucking companies are obligated to do things like provide benefits and pay payroll tax for them.

For that portion of the driver base, it is now much more expensive to use owner-operators, and affected drivers have much less flexibility in choosing their work (many independent contractors work part time under contract with a trucking company and part time on their own).

This way of life will likely vanish in California under AB5.

What happens in California — as the largest state economy in the U.S. and home to the busiest North American port — has the potential to spread to other states (or even federally).

Will the AB5 Bill Affect the Entire Trucking Industry?

Even though it’s only currently a concern for a subset of drivers in California, AB5 could have major implications for the entire trucking industry.

It effectively creates two separate labor pools for owner-operators in the U.S., one in California and one in the rest of the country.

AB5 has the potential to destabilize the trucking labor market in California, which could create challenges for any company who needs to move freight in the state.

Capacity could a take a hit if truckers decide to leave the state, and rates could rise if carrier expenses go up when they have to pay drivers as full-time employees.

What Kinds of Drivers Would AB5 Impact?

Currently, there are 70,000 owner-operators driving in California who are affected by AB5.

However, the most profound impact of the law is felt by a slightly smaller subset of them.

The total set of for-hire drivers exist on a spectrum, but you can divide them into a few major groups.

Industry Deep Dive: If you're new to the structure of the truckload market, check out this owner-operator deep dive to master the essentials. 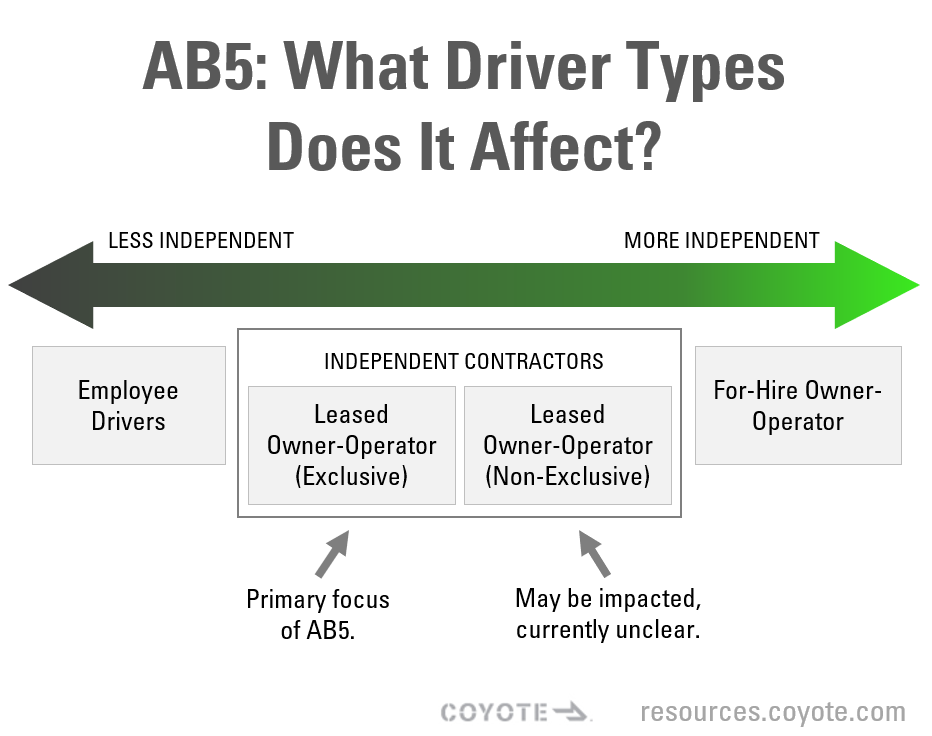 Employee drivers work for a motor carrier company and do not own their own equipment. They’re required to take on whatever loads their employer demands in exchange for salary, benefits and eligibility for Worker’s Comp.

Leased owner-operators or business capacity owners may or may not own their own trucking equipment (tractor(s), trailers(s)), and do not have their own motor carrier operating authority.

They enter into an exclusive lease agreement with a motor carrier to have that company’s authority conferred on them (run under their authority).

Though they operate as an independent contractor able to choose their own loads, the lease agreement keeps them from using their equipment on the open market.

These are owner-operators who both own their own equipment and have their own operating authority.

They haul primarily for a motor carrier as an independent contractor, with whom they have a lease agreement, but can also operate on their own.

Also called for-hire or brokerage owner-operators, these owner-operators own their own equipment, have their own motor carrier authority from the Department of Transportation, and source loads via brokers and load boards.

They are their own bosses, keeping 100% of the revenue they generate from each load, but they have to take care of their own insurance, taxes, FICA and equipment expenses.

The middle two groups — leased owner-operators operating as independent contractors — are at issue under AB5.

Under AB5, business capacity owners are no longer be permitted to enter into lease agreements with motor carriers for the exclusive right to their services and the use of their equipment.

This category of driver has essentially become illegal.

The picture is a bit murkier for owner-operators that work as independent contractors, but on a non-exclusive basis.

If they have DOT authority, they can conceivably exclusively lease one piece of equipment to a motor carrier but operate independently on the open market with a different truck outside of that lease agreement.

It is unclear whether AB5 would disallow this kind of part-time arrangement, but observers are concerned that it is so broad in its scope that it would. As full implementation settles in, the full impact will become clearer.

Important note: AB5 only covers owner-operators who work in the state of California. If they are entered into lease agreements with California-based companies but drive elsewhere, the law does not apply to them.

Are Truckers For Or Against AB5?

AB5 is legislation crafted to protect workers from exploitation by their management — it might be easy to assume that truckers (the workers in question here) would generally support it.

It’s not that simple, however.

The California trucking market, like the rest of the country, is massive and fragmented. There are many different types and sizes of trucking companies with different operating models. Not all drivers will be impacted in the same way, and are likely to have different opinions.

There are several groups representing both drivers and smaller trucking companies that sided with larger motor carriers in opposition to the law, favoring more independence and flexibility.

Some Trucking Groups Against AB5:

Some Trucking Groups For AB5:

One group who supports the bill is the Teamsters Union, which represents local delivery drivers who tend to fit a more conventional employee profile by performing work for a single company. They believe AB5 is essential for protecting their membership from exploitation and misclassification.

How Did We Get Here? An AB5 Timeline

September 11, 2019: AB5 passes both houses of the California state legislature.

November 12, 2019: The California Truckers Association (CTA) files a lawsuit on behalf of its membership in opposition to the Dynamex ruling and AB5.

December 31, 2019: One day before the law is to go into effect, the U.S. District Court for the Southern District of California puts in place a restraining order (injunction) preventing it from being applied to motor carriers.

May 3, 2021: The Ninth Circuit Court of Appeals rules against the CTA and reverses the District Court’s (i.e. the lower court's) decision. However, the Appellate court allowed the injunction against the law to remain in effect until the Supreme Court decided on whether or not it would hear the CTA's appeal.

August 29, 2022: U.S. District Court for the Southern District of California officially lifts the injunction that was exempting the California trucking industry from the ABC test in AB5. Though AB5 is now the law, trucking groups are still working with state officials to gain clarity into exactly how and where AB5 will apply.

Present State: When the Supreme Court declined to the hear the CTA's appeal, AB5 went into effect in the California trucking industry.

This fundamentally altered some trucking companies' business models as it relates to working with owner-operators.

The impact to trucking rates and capacity is still unclear, as well as the likelihood it will spread to other states.

What Can Trucking Companies Do About AB5? 4 Options

Now that AB5 is in effect, trucking companies who operate in the California essentially have these options:

This is the most drastic step a trucking company could take in this environment.

While not a desirable solution for either motor carriers or drivers, this is the surest way to avoid running afoul of AB5.

2. Shift to an employer-employee model.

This outcome is the goal of the bill: To create a labor environment in which all full-time drivers are employees eligible for full benefits and workers’ compensation.

This would mean creating two distinct businesses, one which employs drivers directly and one which serves as a brokerage for independent contractors with the authority to set their own rates and accept work elsewhere.

There is a very narrow exemption crafted into the AB5 bill for independent contractors who provide services directly to a contracting business rather than to customers of that business.

To receive this exemption, a company and contractor must meet all of the following detailed requirements, making it quite a challenge to satisfy.

B2B exemptions from the text of AB5:

What Could Truck Drivers Do? 3 Options

For their part, California drivers, specifically leased owner-operators, also have a few options:

1. Move out of California.

Drivers can move their residence outside California and run more than 50% of their miles outside the state.

2. Get an authority and change their status.

Drivers can get their own operating authority and drive for a brokerage rather than as a leased owner-operator.

Drivers could deadhead out of California after running freight into the state.

Regardless of how much AB5 will ultimately impact California, a third-party logistics provider (3PL) with a dense, centralized network is essential for accessing capacity and finding the coverage you need.

With a nationwide network of over 70,000 vetted carriers, Coyote can help you navigate an increasingly complex freight market.

Want to see how we do it? Get your first quote instantly today.

Note: This is not intended to be legal advice. If you need legal advice on how to deal with AB5, you should consult with your counsel.