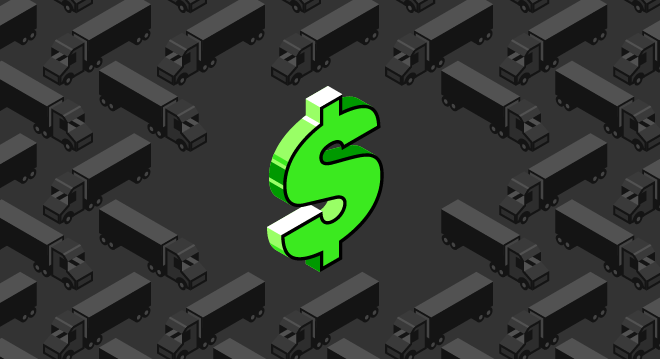 In our Q1 2020 Coyote Curve® Market Forecast, we detailed how spot truckload rates are on the rise, heading back towards year-over-year inflation.

We also presented two versions of our 2020 forecast: one with a recession, and one without.

At a time when the stock market is strong and headlines about the economy are generally positive, it may seem strange to discuss a potential economic recession — but there are several indicators that point towards the possibility of one happening in 2020.

In this article, we’re going to peel back a few more layers of the onion and look at the key economic indicators that drive truckload volume (which represents the demand half of the U.S. truckload market’s supply and demand equation).

We’ll also look at how a recession would impact rates and capacity.

There are so many data points within the $800B+ U.S. truckload market that it can be tough to decide which ones to focus on.

When developing our Coyote Curve model, we rely on five key indicators to give a high-level view of the economy and build confidence in our forecast.

Before we dive into the current state of each, let’s review what each of those indexes mean, how they interact with each other, and how they impact truckload rates and capacity.

1. Truckload Volume
The amount of stuff shippers are shipping.

This is our proxy for shipper demand. It’s the black line that is in our core Coyote Curve charts.

When volume increases relative to supply (aka the total number of available trucks), spot rates will increase as shippers start competing for capacity.

Eventually contract rates will rise and more carrier capacity will enter the market until there is oversupply relative to demand. Volume is closely linked to Industrial Production.

2. Industrial Production (IP)
The amount of stuff we’re making as a country.

IP measures the real production output of manufacturing, mining and utilities. The higher the index goes, the more physical goods that truck drivers need to move.

IP is the primary leading indicator to truckload volume activity.

3. Imports
The amount of stuff we’re bringing into the country.

Imports tracks how many physical goods are coming into the country. This is also a leading indicator of truckload volume — the more we’re bringing in, the more loads of freight that truck drivers will have to move.

5. Sales-to-Inventory Ratio
The amount of stuff shippers have in their warehouses.

When this index goes up, it means shippers have more physical goods in stock on their shelves. This index generally has an inverse relationship with consumption.

When the sales-to-inventory ratio is higher, it acts like a brake to IP and import growth. When consumption picks up, shippers move the inventory in their warehouses first, then create new product and/or buy new product from other countries second.

How an Economic Recession Impacts the Truckload Market

“A recession is a significant decline in economic activity spread across the economy, lasting more than a few months, normally visible in real GDP, real income, employment, industrial production, and wholesale-retail sales.”

- The National Bureau of Economic Research

We’ve covered the key indicators — let’s quickly look at how each usually acts in the event of a recession. 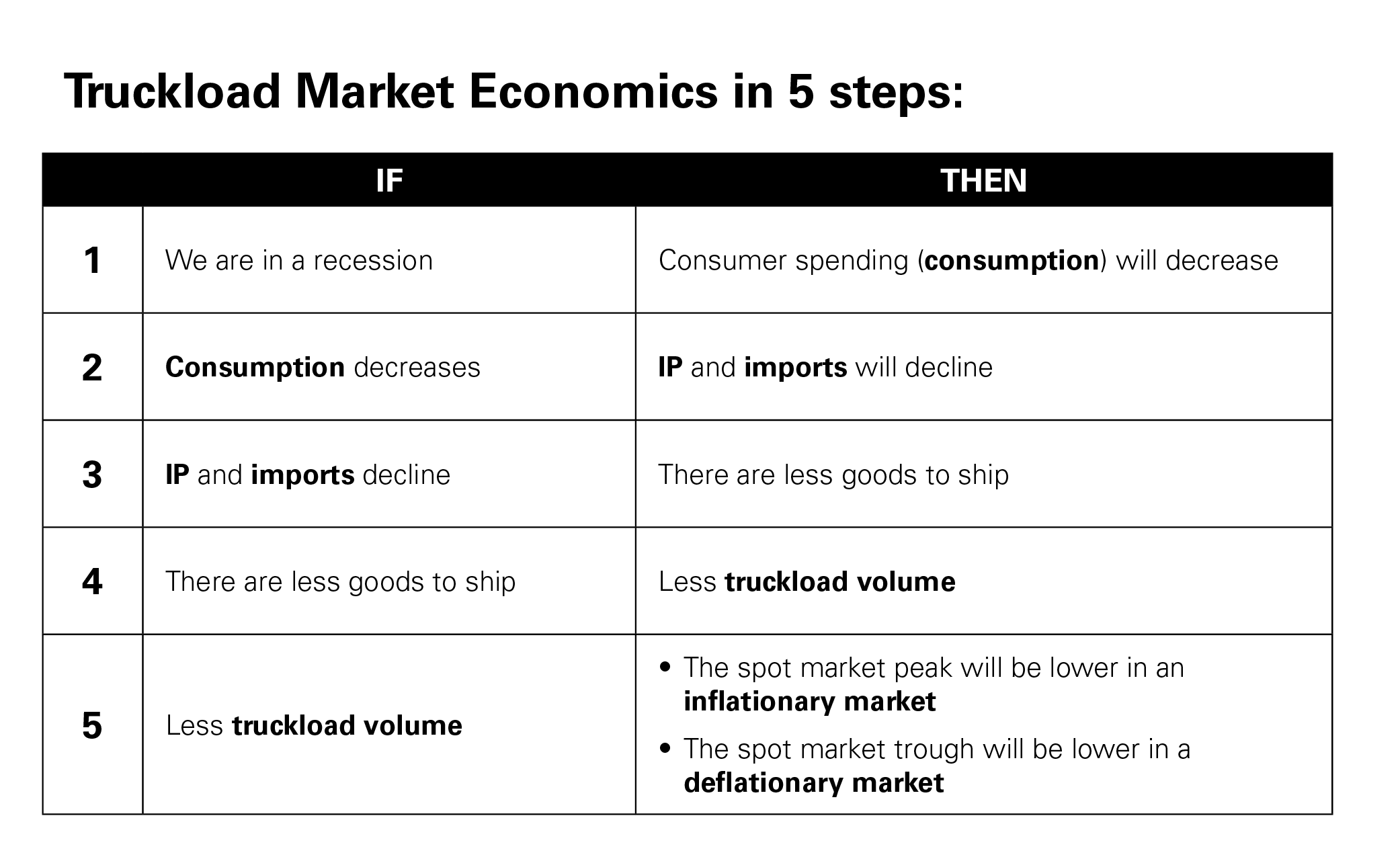 Negative Industrial Production and imports do not necessarily mean we will enter a recession. This is the fifth time IP has crossed into year-over-year negative territory in the last 30 years. 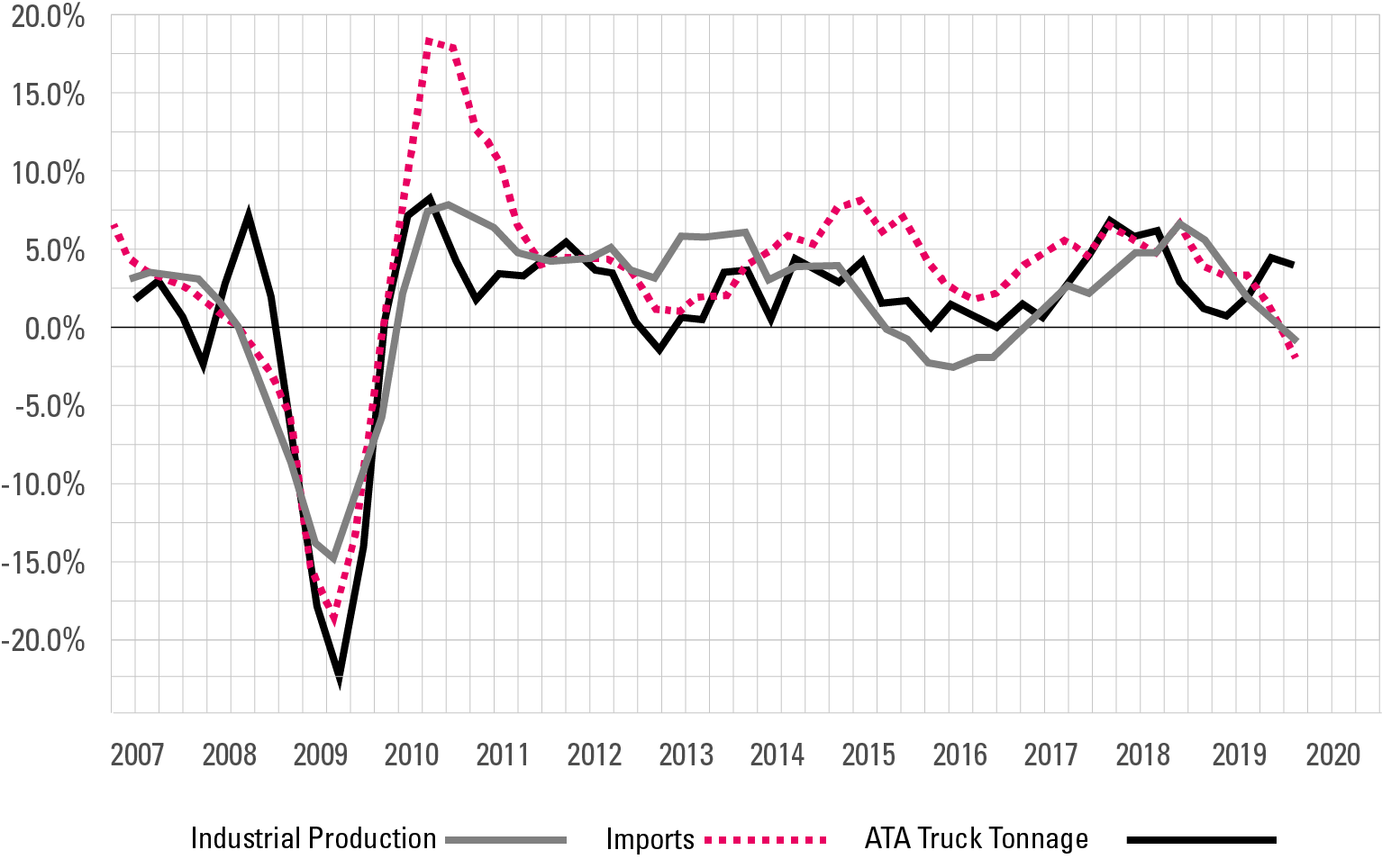 IP went negative in 2015, and yet no recession. Why not? The power of the American consumer. As long as consumption holds strong, it will eventually pull IP back into positive territory.

This is the 5th time in the last 30 years that Industrial Production went negative — 3 of those 5 lead to a recession.

Hopefully, the continued strength of the American consumer will pull IP back up; however, until we see an increase in IP, we can’t take the recession risk off the table. 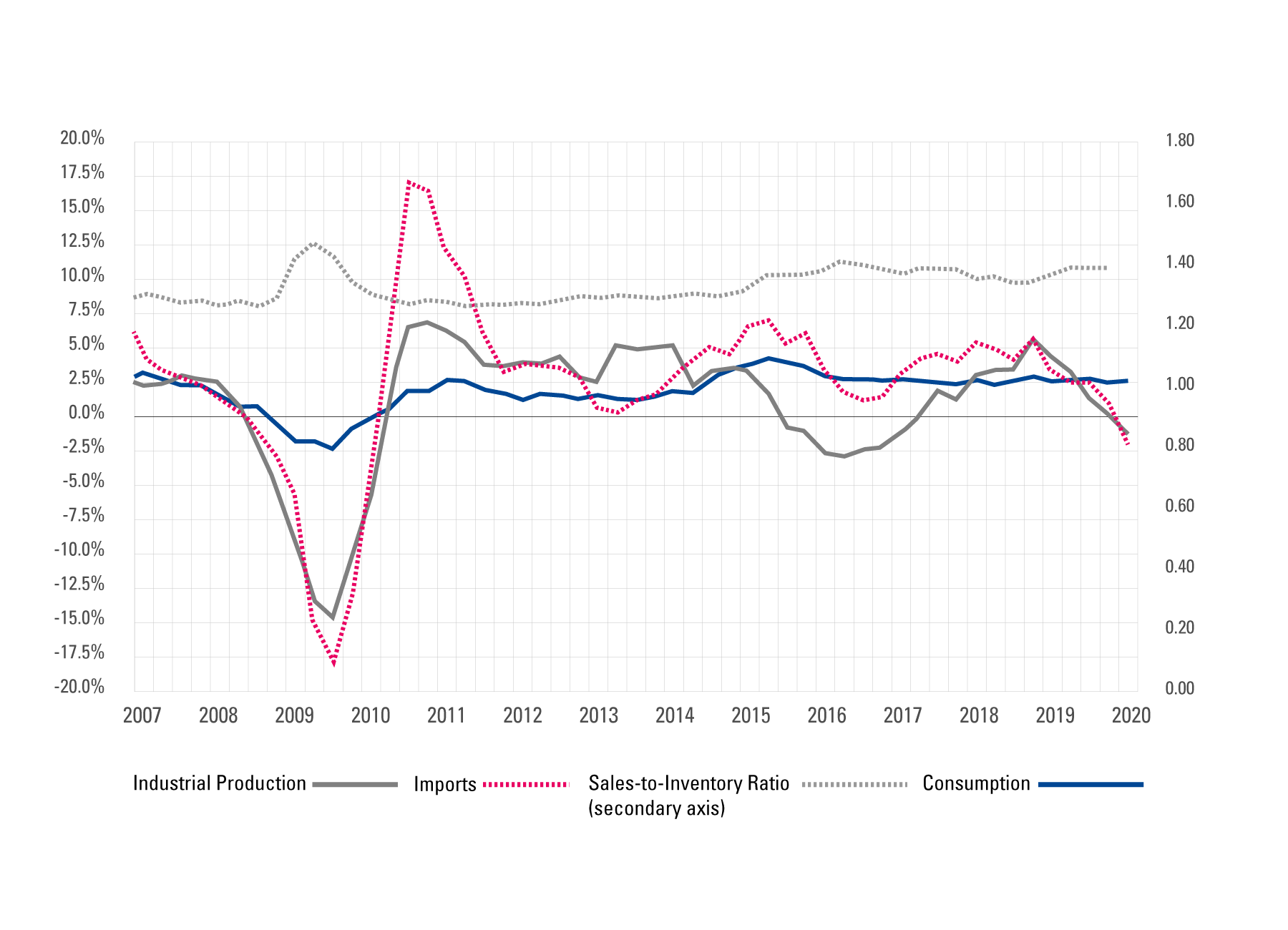 If an economic recession is in the cards for 2020, the current stability of consumption has likely pushed that risk out into the back half of the year at earliest.

Can We Have an Inflationary Market and a Recession Simultaneously?

An economic recession and an inflationary truckload market are not mutually exclusive — we can have both at the same time. For a comparison, look to our first observed market cycle.

The country entered the Great Recession in late 2007, where we remained until the second half of 2009. Despite a tanking economy, spot rates went inflationary in Q1 2008 and stayed there until mid-2009.

We can have a recession and an inflationary spot market at the same time — look to our first observed market cycle.

Though the market might not feel tight, the spot market is likely to flip year-over-year inflationary by the end of Q1, regardless of what happens with the economy.

In the event of a recession, the height of the market peak will be lower, and the amount of time we spend in inflation will be shorter, but the cycle will continue to operate as usual.

Preparing for a Tighter Market

There are several steps shippers and carriers can take to better prepare their networks for success, whether or not we have a recession.

Read How to Become a Carrier of Choice to get tips that will grow your business in any market or economy. 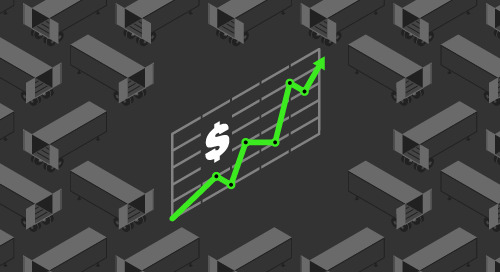 Preparing for a Tighter Truckload Market: 4 Things Shippers Can Do

Truckload spot rates are on the rise, heading towards inflation — learn best practices you can apply to you... 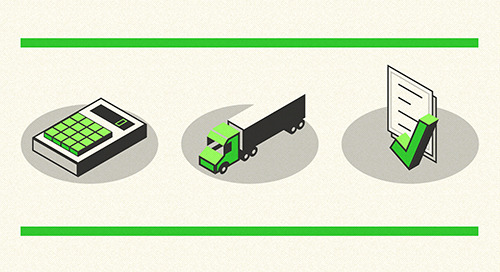 Preparing for Your 2022 RFP? Here Are 7 Steps for a Better Transportation Bid 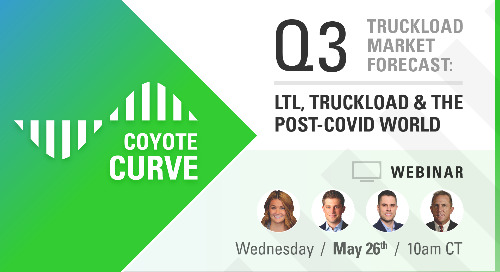 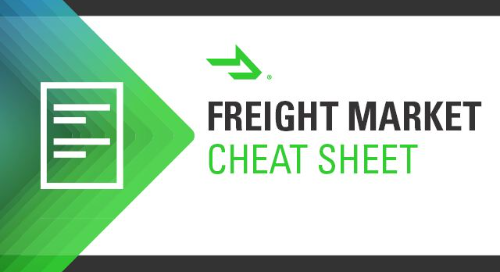 Download this quick reference guide to stay on top of LTL, truckload, intermodal and cross-border trends, and get 7 actionable tips you can apply to your supply chain. 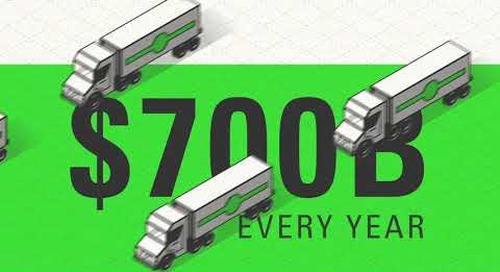 1:06
How to Understand the U.S. Truckload Market with the Coyote Curve

The U.S. truckload market is massive, fragmented and dynamic, making difficult for shippers and carriers to manage its ups and downs. This free index can help you navigate the market's chaos. 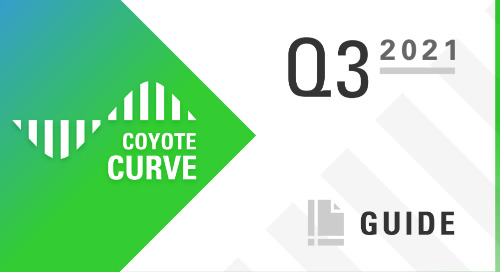 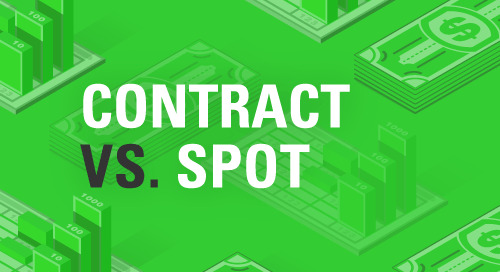 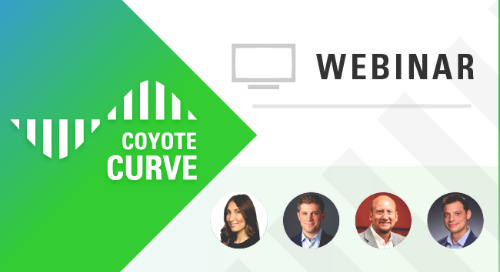 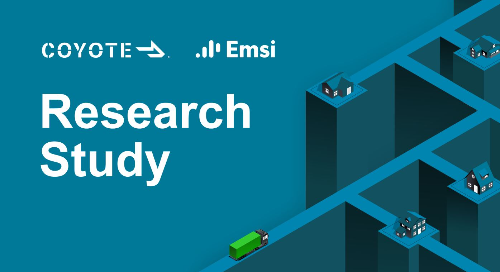 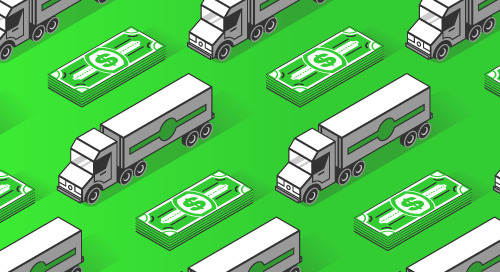 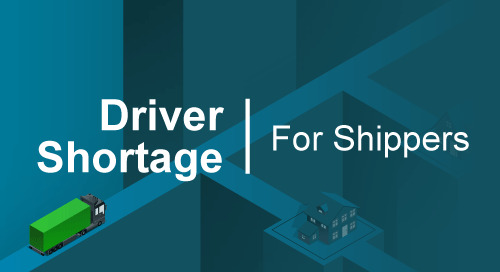 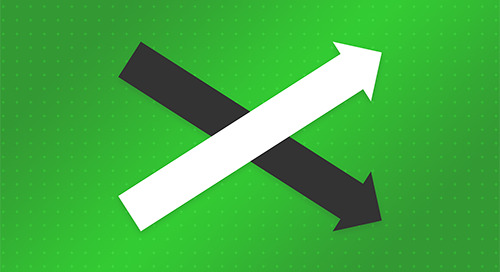 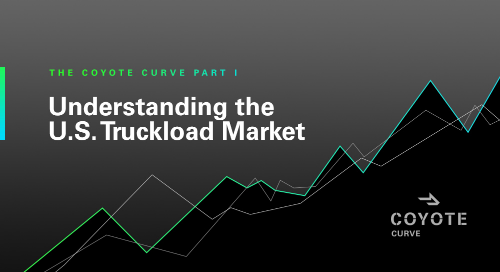 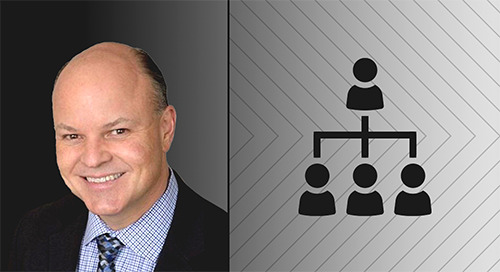 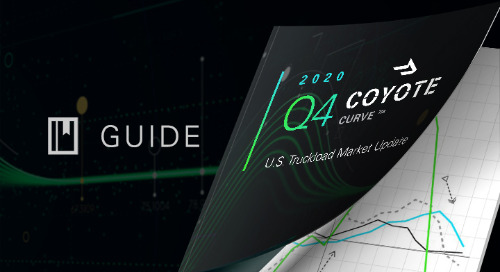 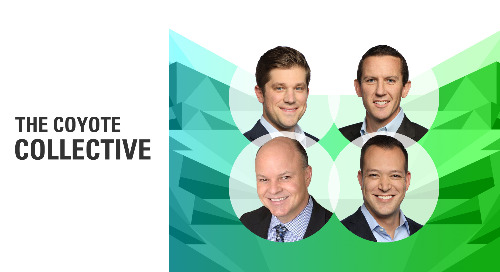 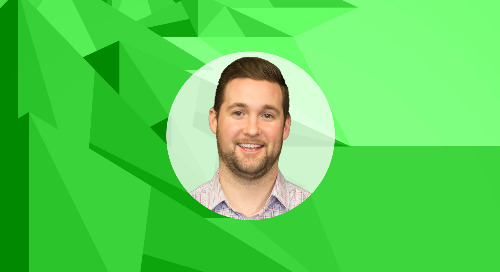 The Basic Economics of the Truckload Market: Webinar 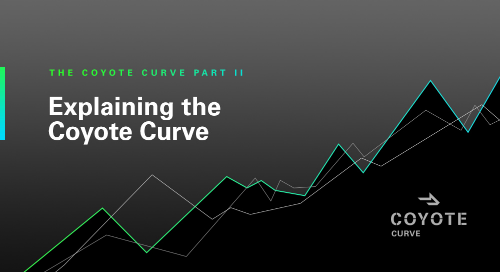 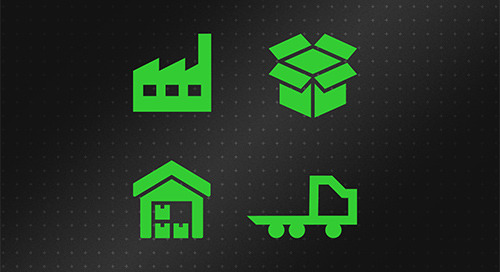 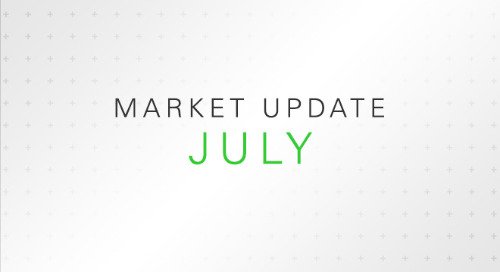 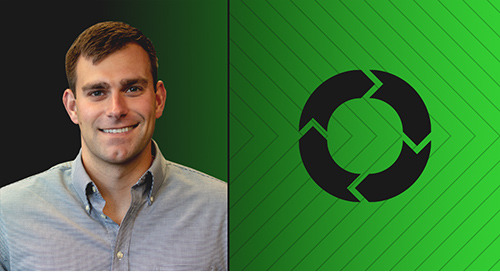