They can be a tricky part of any freight transaction.
They impact both shippers and carriers.
They are a source of many difficult conversations and disagreements.

Does It Have to Be This Way?

Can shippers and carriers get on the same page about freight accessorials?
Are they already there?

As part of our research study on supply chain key performance indicators (KPIs), we asked both sides of the market how accessorials impact their businesses.

Find out what 750 shipping pros really think about truckload accessorials.

Briefly, What Are Accessorials in Freight Shipping?

Accessorials are fees that carriers charge to freight shippers for any service that falls outside the normal course of a standard shipment.

The types and frequency of accessorials you encounter will also vary by shipping mode.

Relative to truckload shipping, you are more likely to encounter LTL accessorials up front, or see them impact your intermodal pricing.

How Important Are Accessorials Really?

As it stands today, like it or not (probably not), accessorials are a critical part of trucking.

This is true for both freight carriers and freight shippers. 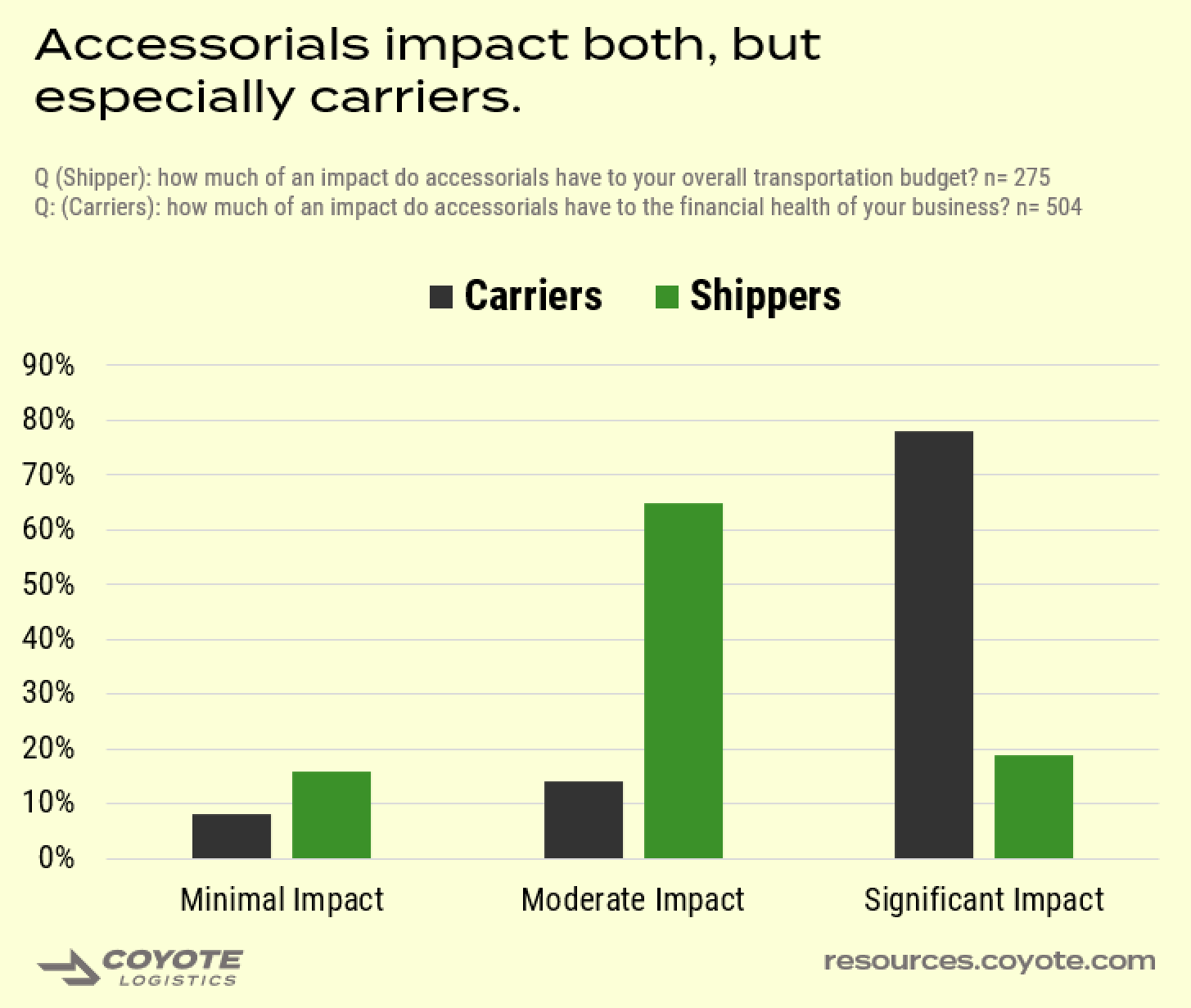 Shippers vs. Carriers: Who's Cheating Who?

Shippers often complain that carriers are trying to nickel-and-dime them to death with accessorials.

Carriers gripe that they’re being cheated out of honest pay when shippers push back on charges.

But who is really cheating who? Is anyone at fault at all?

Are Shippers and Carriers Being Honest?

For the most part, both sides of the market trust the each other.

70% of shippers agree that carriers are usually honest when requesting accessorials — only 8% thought there was outright dishonesty.

Carriers were slightly more suspicious, but generally thought shippers were not acting out of deception — 62% agreed shippers were honest, 26% were neutral and only 12% disagreed. 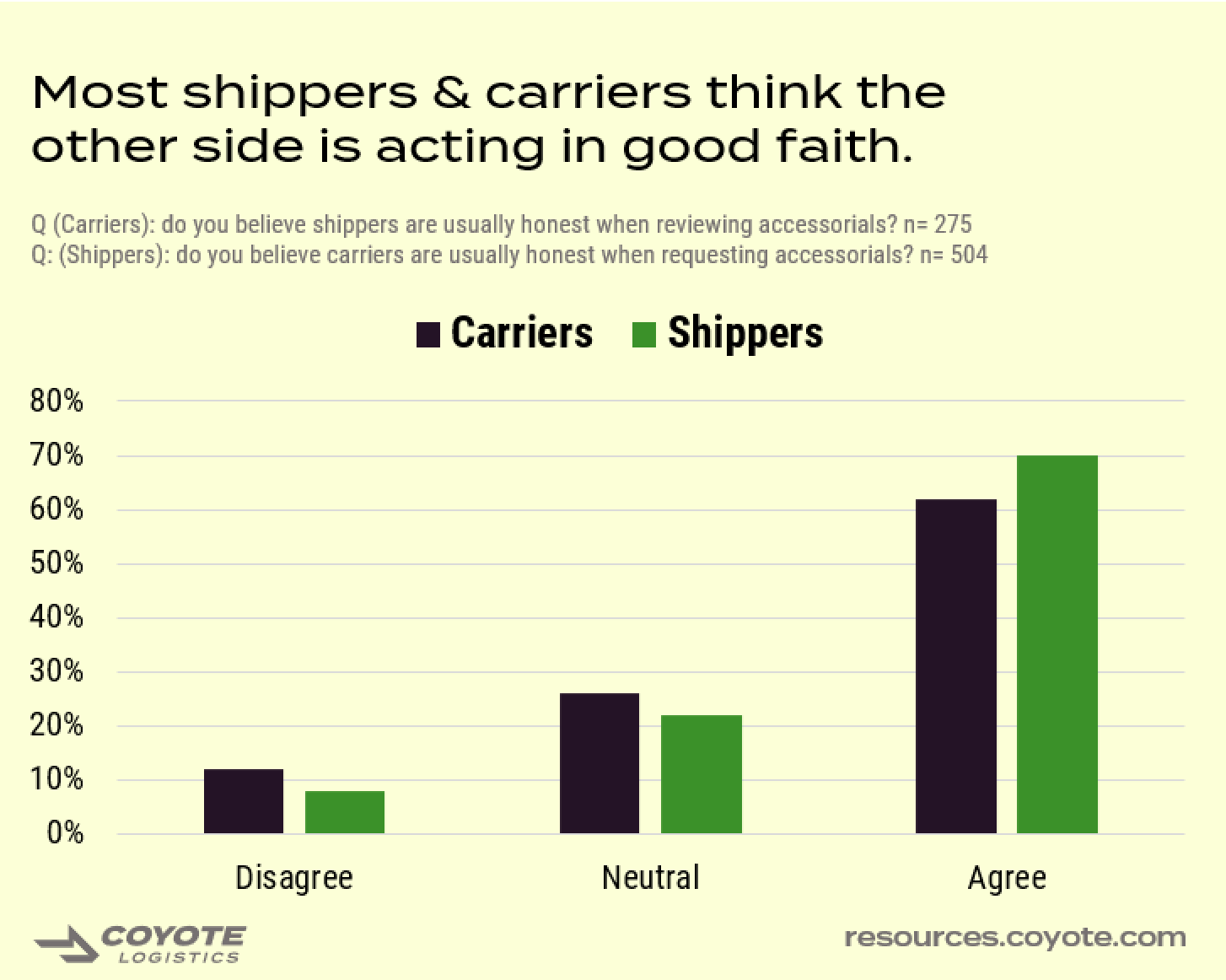 Is the Cost Fair?

You might be surprised to learn that a solid majority of both camps think that the amount they pay or receive is fair (even if they resent the process).

67% of shippers think they're paying the industry standard and 66% of carriers think they are being fairly compensated for their time. 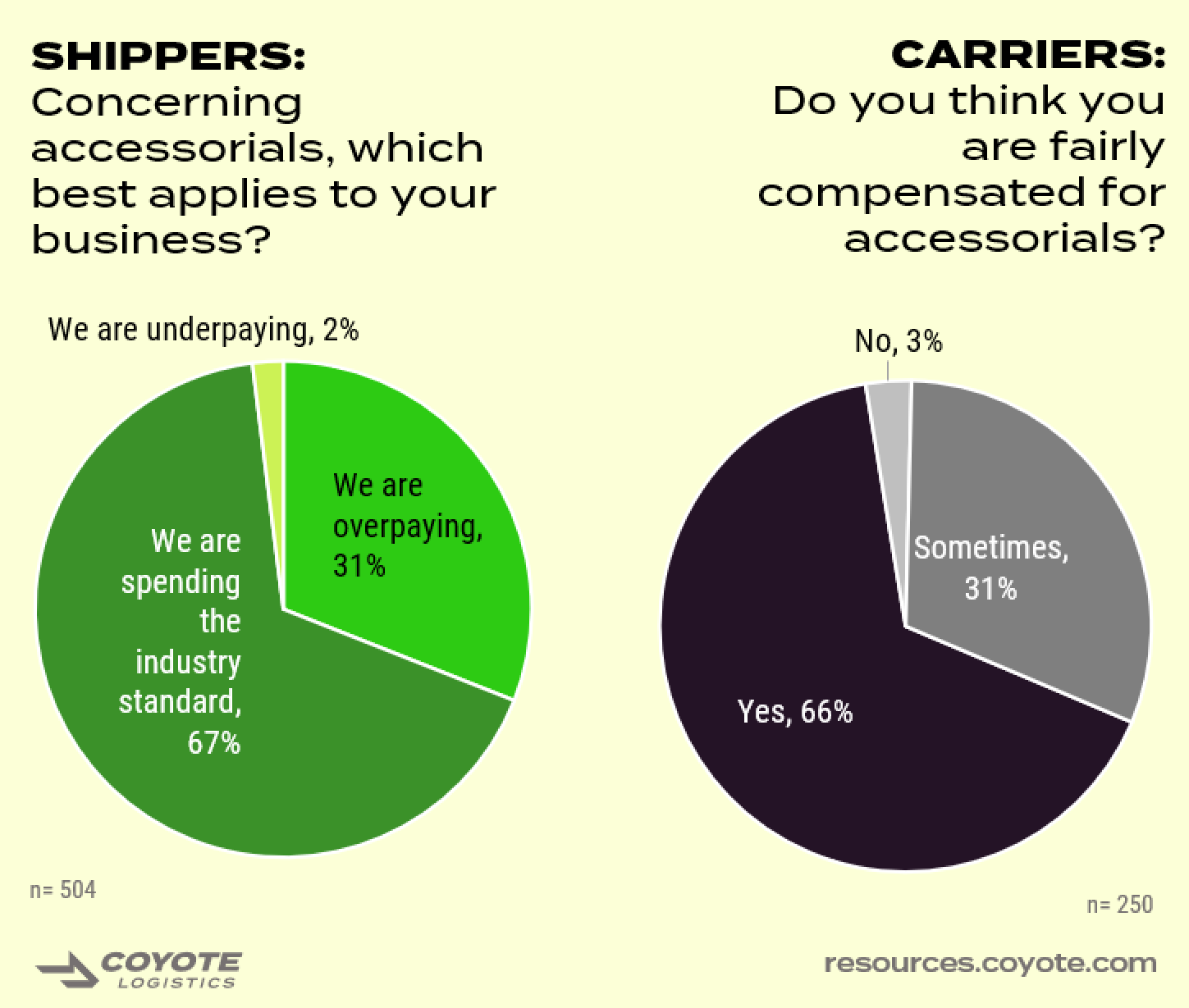 Despite the amount of disagreements that accessorials can create, a solid majority of both shippers and carriers think:

We've covered that accessorials are a major part of shipping operations — regardless of where you fall in the supply chain — but how are businesses handling them in their operations?

Cash Flow Is King, And Carriers Are Good at Getting Paid

Accessorials are very important to carriers, so it's no surprise that 94% of carriers think they are effective at tracking down and getting paid for accessorials, with 45% saying they were very effective. 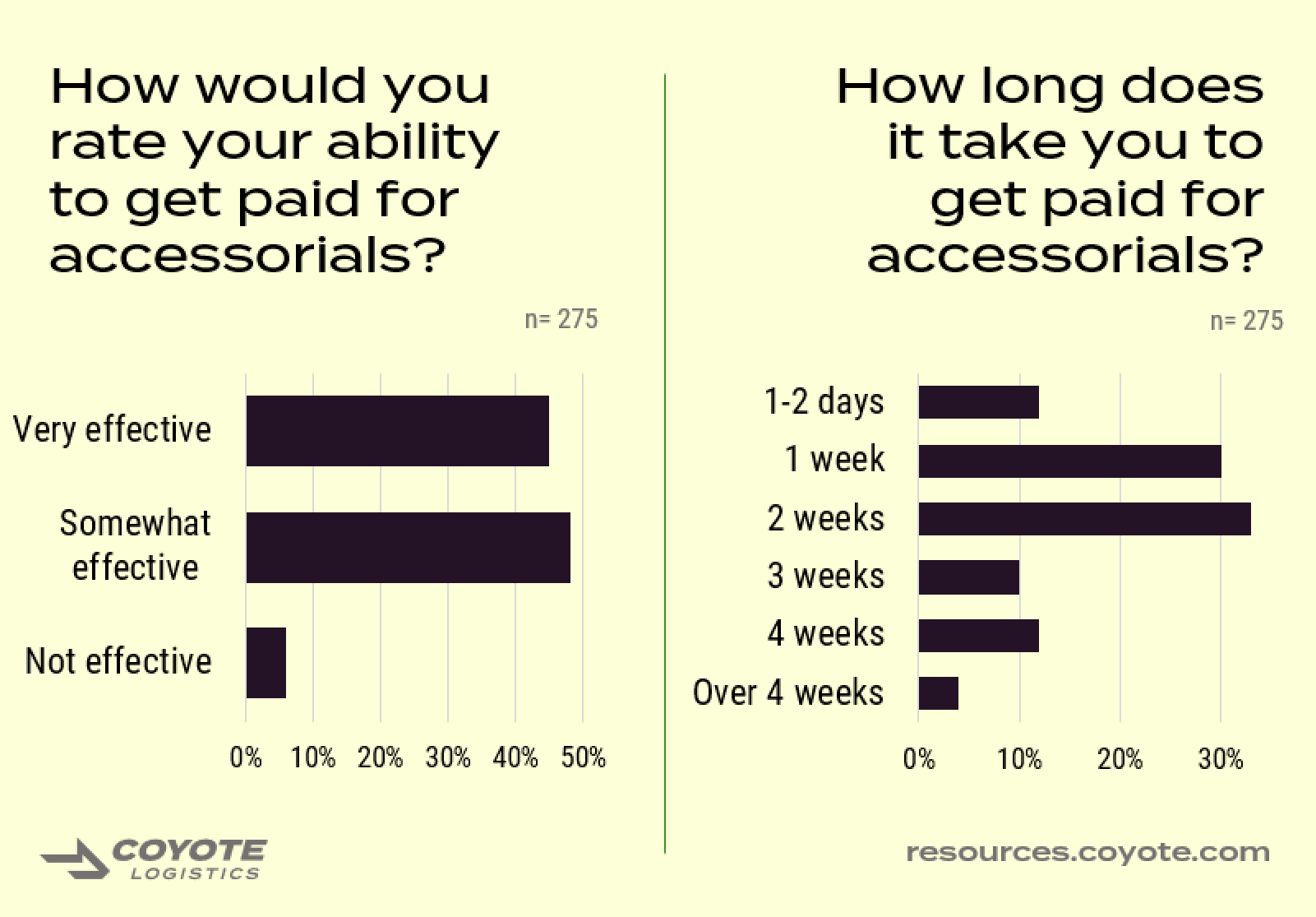 Accessorials Can Be a Useful Smoke Signal

Though a necessary evil, there is a silver lining to accessorials. 90% of carriers use them to identify issues in fleet operations at least some of the time.

Accessorials Can Always Be Reduced (Hopefully)

Most shippers view accessorials as a cost within their control, which means they can do something about it.

71% are actively working on reducing accessorial spend with strategic initiatives, and a further 26% are planning to do so in the near future.

They Are a Huge Time-Suck for the Accounting Team

Beyond the actual cost, accessorials create an opportunity cost by slowing down back office employees.

61% of shippers agree that managing accessorial requests is one of the biggest time-wasters for their accounting team.

But They Are Useful for Identifying Problem Areas

Will It Get Any Better?

Like so many things in the modern supply chain, technology is creating more visibility, and more possibilities.

76% of shippers and 66% of carriers believe technology will significantly reduce the occurrence of accessorials in the next 2 years.

Perhaps more important than technology is the shared attitude of all participants in trucking.

No one likes to argue, and both sides are seeking common ground.

81% of both shippers and carriers agree that there should be set industry standards for accessorials that everyone can agree on.

If accessorials are a necessary evil of freight shipping, everyone at least wants them to be predictable. 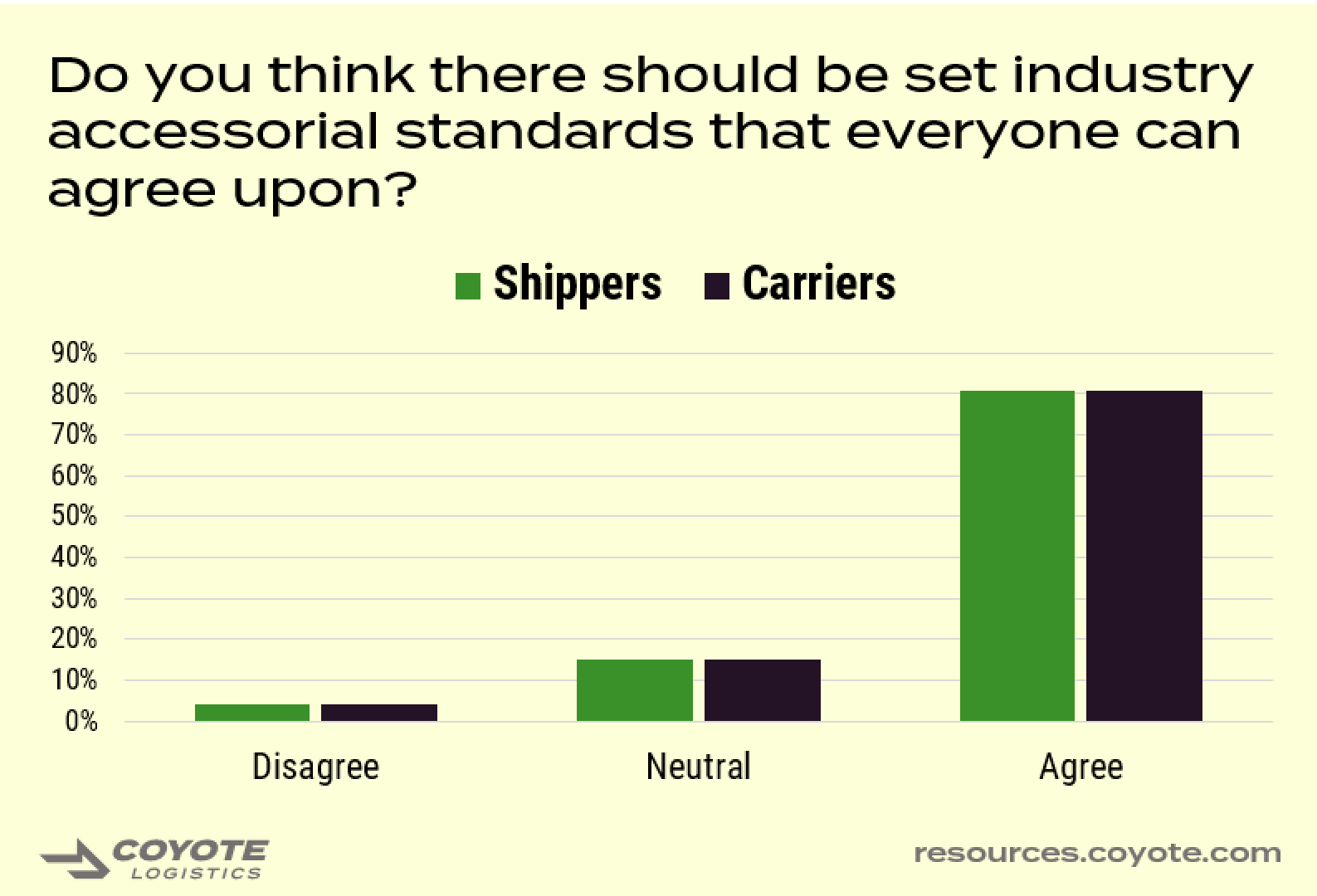 Could We Do Away With Accessorials?

Here’s where the divide between shippers and carriers gets interesting.

Accessorials play a crucial role in accounting for lost time and productivity for carriers — remember 78% think they are  important to the financial health of their business.

But what if this didn’t have to be the case?

Most shippers not only wish they didn’t have to deal with accessorials, they’re willing to make a significant compromise in order to do away with them: 80% say they would rather pay higher freight rates up front guaranteed no accessorials than to pay accessorials regularly.

80% of shippers would rather pay higher freight rates up front than deal with accessorials on the back end.

Most shippers and carriers think:

We may make it to a truckload market without accessorials in the near future, but we aren't there yet.

With more openness and regular communication, combined with more technology, we can move closer to eliminating this necessary evil of freight shipping.

Get the Full Story About Supply Chain KPIs

Want to hear even more from shippers and carriers about how they collect and use KPI data to drive their business decisions?

Supply chain decision-makers from more than 1,500 companies weighed in to tell us what KPIs matter the most to them, what tools they use to manage their data and where they’d like to see standards set for KPI performance across the field.