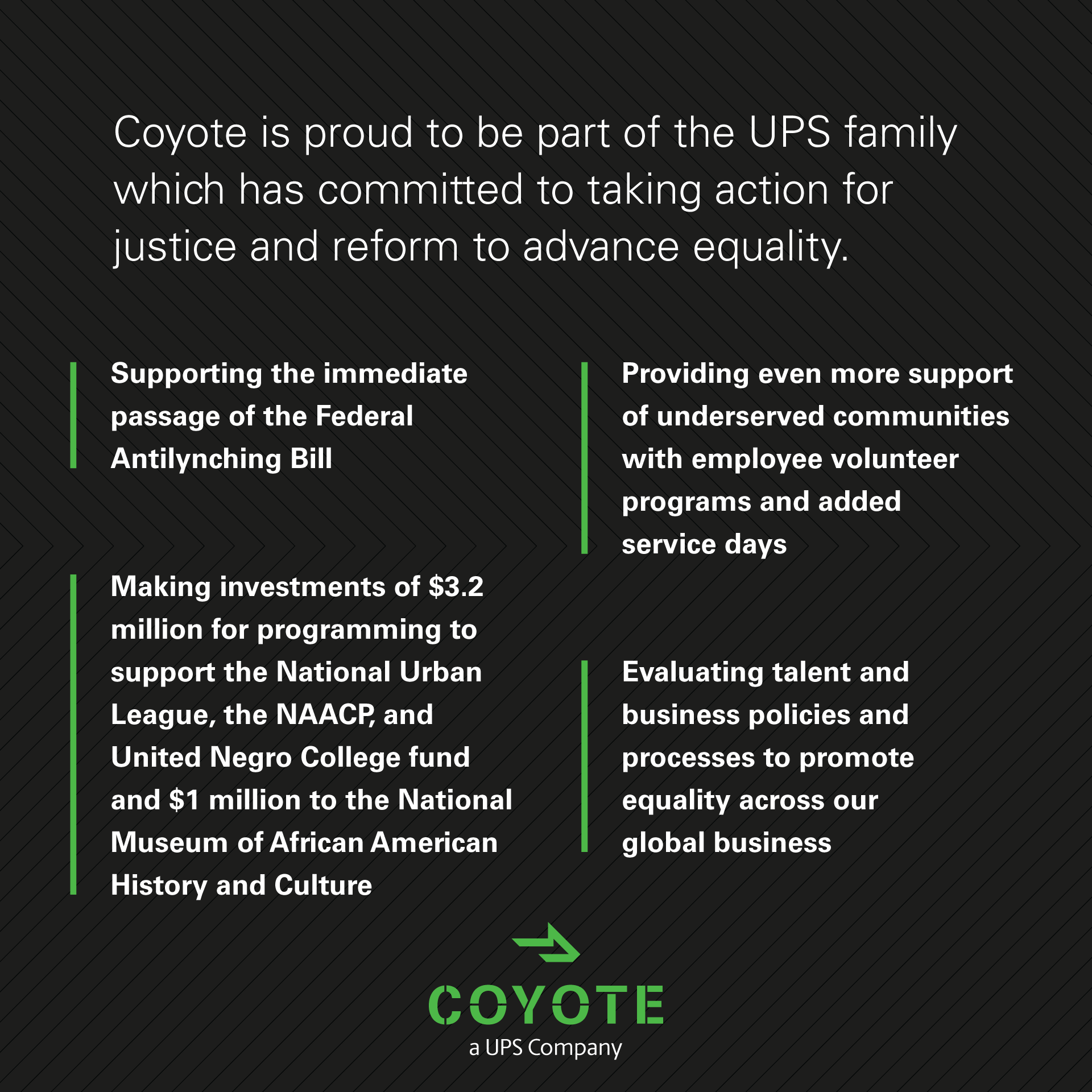 Read on to learn more about what UPS is doing in response to the killings of Ahmaud Arbery, George Floyd, Breonna Taylor and others.

UPS (NYSE:UPS) announced it is stepping up its actions in support of justice, reform and equality for Black Americans in response to the killings of Ahmaud Arbery, George Floyd, Breonna Taylor and others.

"No one is safe until we are all safe, and we know there is no place in any community anywhere in the world for racism, bigotry, or hate," said Carol Tomé, UPS CEO. "We will not stand quietly or idly on the sidelines of this issue."

“More than 112 years ago, UPS founder Jim Casey envisioned a company centered on its people and built on the core values of fairness, dignity and respect; but we know that has not been the lived experience of many Americans, including those in the Black community,” Tomé continued. “While many advancements have been made since our company’s founding, there is still considerable work to be done and we are committed to doing our part to help eradicate racial injustice and inequality around the world.”

As a specific and immediate action step, the company is urging the U.S. Congress to adopt the Emmett Till Antilynching Act, which would designate lynching as a federal hate crime. UPS will also continue its decades- long funding support of the Congressional Black Caucus Foundation and joint advocacy efforts to advance federal legislation critical for greater racial justice and equality. UPS will work with international organizations and national governments to advance United Nations Sustainable Development Goal 10 - Reduced Inequalities. This builds on existing UPS support for the principles articulated in the United Nations Guiding Principles on Business and Human Rights and the United Nations Universal Declaration of Human Rights.

In the United States, the company has supported the passage of hate crimes legislation in Georgia, and has committed to urging the governors and legislatures of states without similar legislation – including Arkansas, South Carolina and Wyoming – to prioritize passing a bill.

Given the importance of raising awareness of racial injustice among current and future generations, the company has committed $1 million to the National Museum of African American History and Culture. The funding will support the museum’s efforts to advance educational programing on historical and present day efforts to advance racial equality in the U.S. UPS believes better understanding and sharing of Black history and culture is critical to fostering greater empathy and understanding of the challenges and opportunities to overcome racism.

UPS also is stepping up actions within the company. With almost 500,000 employees in more than 220 countries and territories, UPS’s greatest strengths are the diversity of its people and the unique qualities each brings to work every day. In addition to advocating for legislative change, and funding and partnering with organizations that advance its core values of fairness, dignity and respect for all, the company is committed to ensuring all UPS employees experience these ideals within its workplaces around the world. To that end, UPS is expanding its internal unconscious bias training, creating regular forums for additional discussion regarding topics surrounding racial equality and justice, and expanding its internship program with historically Black colleges, among other actions.

UPS has a proud tradition of volunteerism in the communities it serves and believes one of the most powerful ways to foster change is by engaging personally and directly to support racial equality.

UPS, therefore, has pledged one million hours of employee volunteer service around the world in support of mentoring and educational programs in underserved Black communities globally.

“Today, we are reaffirming what we know is right and doing our part to accelerate progress,” continue Tomé. “We will be champions for justice and equality, not just in our words but in our actions here in the U.S. and everywhere we operate around the world.”

UPS (NYSE: UPS) is a global leader in logistics, offering a broad range of solutions including transporting packages and freight; facilitating international trade, and deploying advanced technology to more efficiently manage the world of business. UPS is committed to operating more sustainably – for customers, the environment and the communities we serve around the world. Headquartered in Atlanta, UPS serves more than 220 countries and territories worldwide.

UPS was awarded America’s Best Customer Service company for Shipping and Delivery services by Newsweek magazine; Fortune magazine’s Most Valuable Brand in Transportation; and top rankings on the JUST 100 list for social responsibility, the Dow Jones Sustainability World Index, and the Harris Poll Reputation Quotient, among other prestigious rankings and awards. The company can be found on the web at ups.com  or pressroom.ups.com and its corporate blog can be found at ups.com/longitudes. The company’s sustainability eNewsletter, UPS Horizons, can be found at ups.com/sustainabilitynewsletter.

Learn more about our sustainability efforts at ups.com/sustainability. To get UPS news direct, follow @UPS_News on Twitter. To ship with UPS, visit ups.com/ship.

Coyote offers a comprehensive multi-modal solutions portfolio — including truckload, less than truckload (LTL) and intermodal — with data intelligence and market insights to help empower our customers’ business growth in a rapidly changing world.

Coyote became a UPS company in 2015, adding to our expanding portfolio of global services. Headquartered in Chicago, Coyote has more than 3,000 employees operating in 20 offices worldwide. For more information, please visit: Coyote.com.