The Q4 numbers are in.

Has the U.S. truckload market found the bottom, or will it keep digging?

Did peak retail season cause a trucking rate spike? How is 2023 bid season shaping up?

We'll tell you everything you need to know in the Q1 Truckload Market Guide.

These essential resources can help you build foundational knowledge on the truckload market and our proprietary spot rate index.

All typical for this phase of the truckload market cycle.

And in case you're wondering how it's possible to have continued inflation throughout the wider economy and dramatically deflating trucking rates, it's a function of how supply and demand work in the truckload market.

An inflationary truckload market and a recession are not mutually exclusive, and vice versa (more on that below).

Did We Have a Peak Season?

After very little seasonal volatility throughout every other holiday this year (i.e., 4th of July, Labor Day, Thanksgiving and Black Friday), we were only anticipating a modest spot rate uptick over Christmas and New Years (around 5%-7%).

The last two weeks of the 2022 turned out to be much more severe, with truck rates jumping by an aggregate of 20%. However, this spike was not driven by shipper demand, but a squeezing of capacity.

With a tight labor market, carriers were eager to keep their drivers happy, giving them much-deserved time off over the holidays.

Combined with a brutal cold front and severe weather hitting large swaths of the U.S., 2022 gave us one last surprise, but it wasn't enough to change the cycle's trajectory.

Trucking Rates Are Still Falling, But the Drop Is Slowing

We continued to see a deceleration in the downward trend, signaling we're likely near the deflationary inflection point (or at it already). 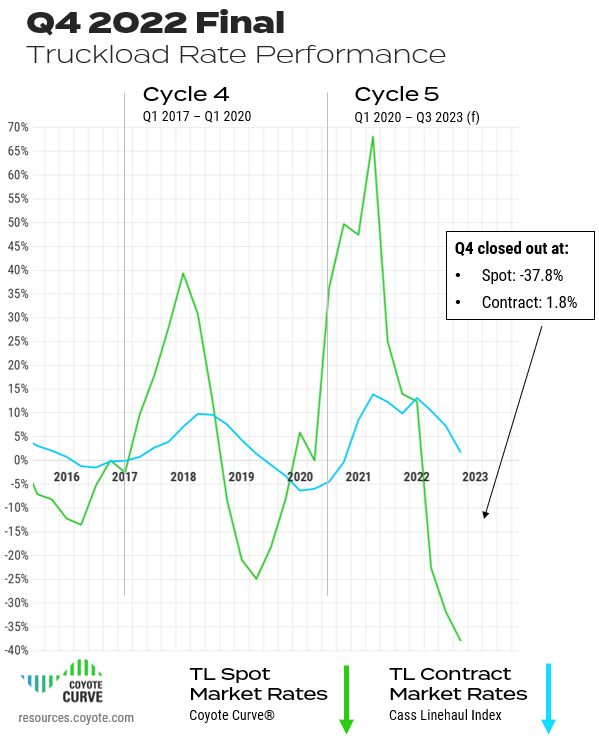 To build further confidence in the Coyote Curve Y/Y spot rate index, let's see it up against our proprietary all-in cost-per-mile index — this is comparing annual change versus the absolute rate.

(As a reminder, these numbers are informed by real transactional data from over 10,000 daily shipments spanning over 15 years.)

Though still slightly above pre-pandemic levels, the all-in cost-per-mile has dropped considerably over the past year (and would have dropped more so if it weren't for higher diesel prices). 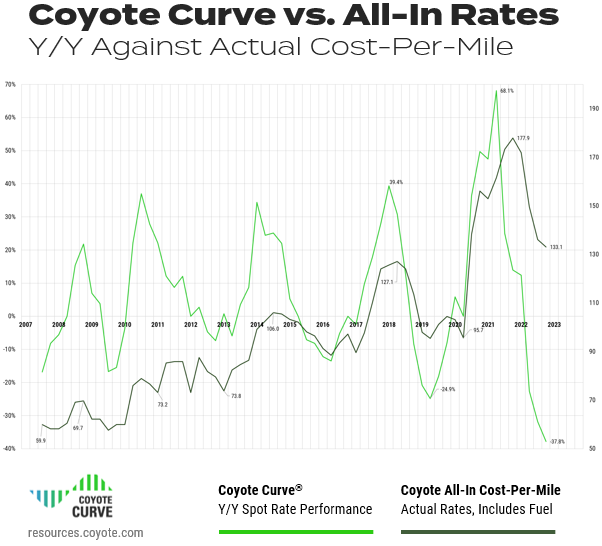 We are likely nearing the bottom, but won't know for sure until the end of Q1.

The truckload market and the economy are linked, but they are not always coupled.

Let's examine the most recent figures for industrial production, consumer spending, imports and inventories through the lens of how they are impacting truckload shipping. 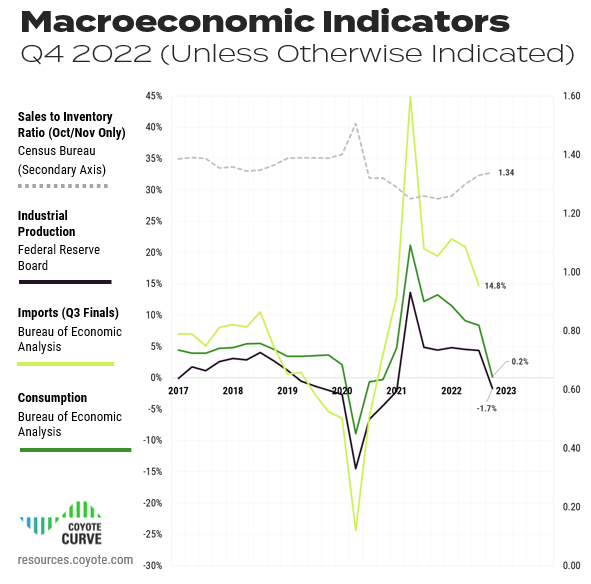 After a several quarters of growth in 2021, personal consumption expenditures are finally showing signs of slowing in Q4, dipping down from 8.4% Y/Y at the end of Q3 to only 0.2% in Q4.

This is likely driven by persistent (though lessening) inflation and fears over a possible 2023 recession.

If consumers continue to spend less (particularly on goods), it will drag down IP and imports, which will mean less freight shipping in the U.S.

Furthermore, many shippers have excess inventory they are trying to work off before replenishing their stocks, and the potential threat of a recession is likely making them even more hesitant.

If this index stays deflationary for several quarters, it will have a significant impact on available truckload freight.

Note: At the time of publishing, we're still waiting on the Q4 figures from the Bureau of Economic Analysis, but will update as soon as possible.

With chaos in international shipping markets over the past two years, this indicator has been particularly volatile.

With lower volumes, the port congestion that plagued Q1 and Q2 has essentially cleared up, even with peak season shipping.

Note: At the time of publishing, we're still waiting on the December figures from the Census Bureau, but will update as soon as possible.

They've stocked up on key items, carrying costs are starting to go up, driven by an increase in interest rates (the Fed's response to inflation). Now, businesses are trying to shed any excess inventory.

This indicator is now coming to the forefront due to the pressure it will put on shippers' bottom lines.

Through November, the sales-to-inventory ratio increased to 1.34, up from 1.33 at the end of Q3 and heading for an increase for the fourth straight quarter.

We've started to see this decline in volumes, especially as shippers struggle with inventory carrying costs due to rising interest rates.

But we aren't in a recession yet. Regardless of what happens in the economy, supply-side pressures should keep the truckload market cycle operating as usual (see below).

We are seeing many tell-tale signs of a stabilized capacity environment and are well into the deflationary leg of the truckload market cycle.

But have we reached the bottom?

Before we dive into the updated Q4 forecast, let's unpack a few of the key trends impacting the market this quarter.

As we covered in the macroeconomic analysis, we're seeing a consistent slowing of truckload shipment volume. Even the traditional retail peak season rush did not cause a significant spike in Q4.

Early Q1 is seasonally the slowest time of year, and if muted volumes persist, it will further pressure rates and carriers.

This would likely bring about a faster bounce back, as more capacity would exit the market faster.

Though still well above pre-pandemic levels, in Q4, diesel trended downwards to 38.1% Y/Y, with a low of $4.71 a gallon in December — the lowest rate per gallon since February 2022 (the month Russian invaded Ukraine). 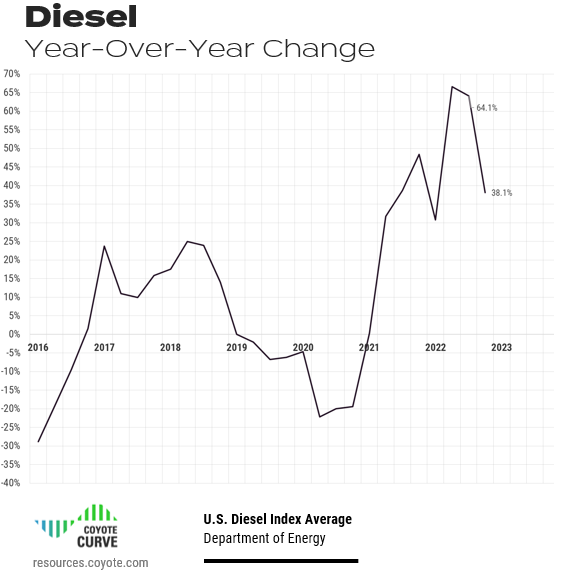 Diesel fuel, which represents around 30% of a carrier’s overall cost, can have a huge impact on a trucking company's profitability if it rises or falls faster than freight rates.

If fuel continues to drop, it could drop the floor for spot rates a little lower, as carriers will have less pressure on their margins.

This would, in effect, extend the amount of time we stay in a deflationary environment. If, conversely, fuel reverses course and gets more expensive, the opposite will be true (faster back to Y/Y inflation).

After historically long backlogs throughout 2021, supply chain shortages are easing and OEM's are starting to fulfill truck orders.

Carriers who wanted to replace old equipment or add net new capacity are getting trucks in their lot (see Q1 and Q2 2021).

For some carriers, order fulfillment may not come as a welcome relief, but a financial burden — the market they bought those trucks in looks very different than the one they're going to be when making those payments.

But carriers are still buying — orders were still inflationary in Q3 and spiked again in Q4 (34.7% Y/Y). Once again, many of these are likely to address replacement (which supply chain issues prevented) rather than net new at this point in the cycle. 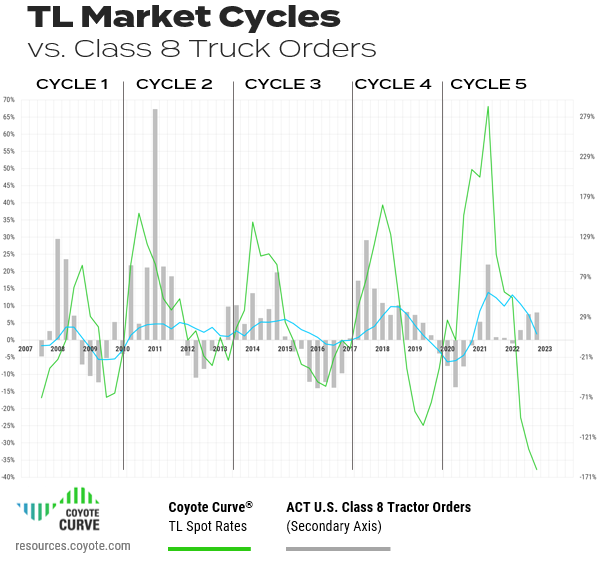 This changing financial landscape could be an issue for many carriers as trudge through a deflationary market, which could pressure the supply side and potentially squeeze capacity out of the market, kicking off the next inflationary market.

Why Truckload Order Fulfillment Could Be a Burden:

As the results from 2023 bid season start to roll in, shippers are looking forward to their next transportation RFP as an opportunity to bring their transportation spend back towards pre-pandemic levels.

Carriers that had been running freight on primary rates were getting a significant premium to the spot market — through Q4, the divergence of spot and contract were near an all-time high.

When these primary rates continue to reset in 2023 annual bids, they will start to feel the crunch, especially if they have new equipment on the books (i.e., fixed costs).

From what we've seen insofar, competition is fierce, margins are razor-thin and many carriers are potentially running spot freight at a loss.

Again, this will contribute to the next inflationary leg of the cycle.

While the supply side of the industry is certainly feeling the pressure, there is a stat that remains strong: employment.

After a decrease throughout 2020, employment in the trucking sector has steadily grown for all of 2021 and 2022.

Until we we see this number reverse course, we haven't likely hit the bottom. Once the labor market cools off and employment drops, we'll know we've reached a deflationary trough.

Truckload Trends Takeaway
Slowing freight volumes, declining spot rates, an influx of new trucks, and rapidly dropping contract rates will all put pressure on the supply side in Q1.

Eventually, this will drive capacity out of the market, bringing about a deflationary inflection point and setting the cycle up for the inflationary climb.

But we may not be there yet. Trucking employment remains strong, and many carriers are flush with cash from two record years. They may have the financial ability to ride out the downward trend for a bit longer, especially if diesel continues to decline.

We've covered the  macroeconomic environment, and key trends — but where does it leave us going forward?

Let's look at the forecast. 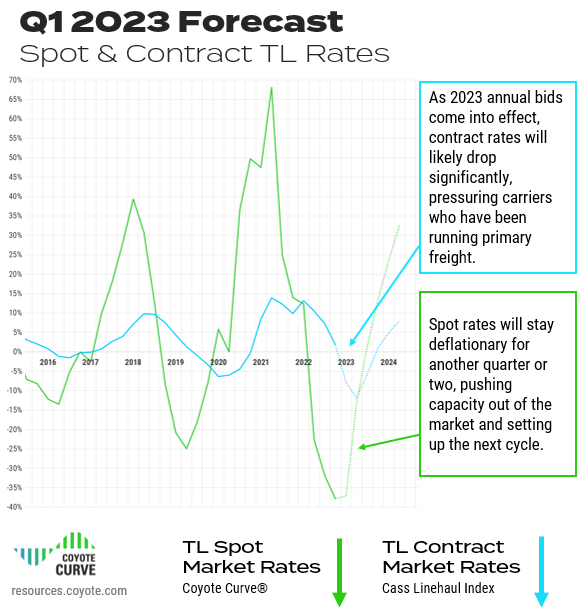 Though we think we may have hit a deflationary inflection point in Q4, we expect current market conditions (soft spot market, loose capacity) to remain relatively unchanged through Q1, with less than a 1% change in our index compared to Q4.

Continued strength in Class 8 truckload orders, dropping diesel prices and still-growing trucking employment all point towards a market that may yet be in search of the bottom.

As 2023 contract rates start settling in by the end of Q1, this added pressure should be the turn of the tide.

We think we'll see real upward movement in Q2, and a Y/Y inflationary environment by Q3 (about a quarter later than we previously anticipated).

What Can You Do?

There is no silver bullet or special trick — it comes down to fundamentals.

Use the (relative) lull in shipping environment to maximize planning and communication with your core freight providers.

As finalize your bid, be prudent about where you're cutting rates and trimming capacity, keeping in mind that the end of 2023 may look different than the beginning.

Are you sharing your data? Don't try to hold onto any secret sauce — we're all trying to solve for the same shipping problems, and the more collaboration the better.

If you want to learn more about how your peers are using supply chain data, you can get insights from over 1,500 shipping pros in our KPI benchmarking research study.

Forecast Takeaway
We're well into a deflationary spot market and will likely stay there for at least another quarter.

Contract rates are going to take a dive by the end of Q1 as annual bids reset, and capacity will start to exit the market.

This will set up the next inflationary rate environment, which we expect to hit in the second half of 2023 (regardless of whether or not we dip into an economic recession).

These three helpful resources will help you learn about truckload market fundamentals and how we build our proprietary index.

If you're new to the Coyote Curve, take a few minutes to familiarize yourself with this foundational content:

*We use the Cass Truckload Linehaul index as a proxy for contract rate performance.