It’s no secret that the U.S. truckload market is massive, fragmented and dynamic.

It can be daunting to try to understand a market this large and varied. But by breaking it into chunks, we can better understand who makes it up and how they fit into it.

The more we know about the people who make up the truckload market, the better we can make sense of its volatility.

Owner-operators are a key component of the truckload market, and the way they fit into it both drives and responds to the rates and capacity you see out there day to day.

Let’s dive deeper into this surprisingly complex carrier group to:

Where do owner-operators fit into the overall truckload market?

Let’s start at the top: there are 3.5 million commercial driver’s license (CDL) holders in the U.S.

Not all of these drivers work in long-haul for-hire trucking. Many of them are local delivery drivers, dispatchers, heavy equipment haulers, truck driving school instructors or bus drivers.

The remaining drivers are long-haul cargo truck drivers, but this group can be divided further into two segments. 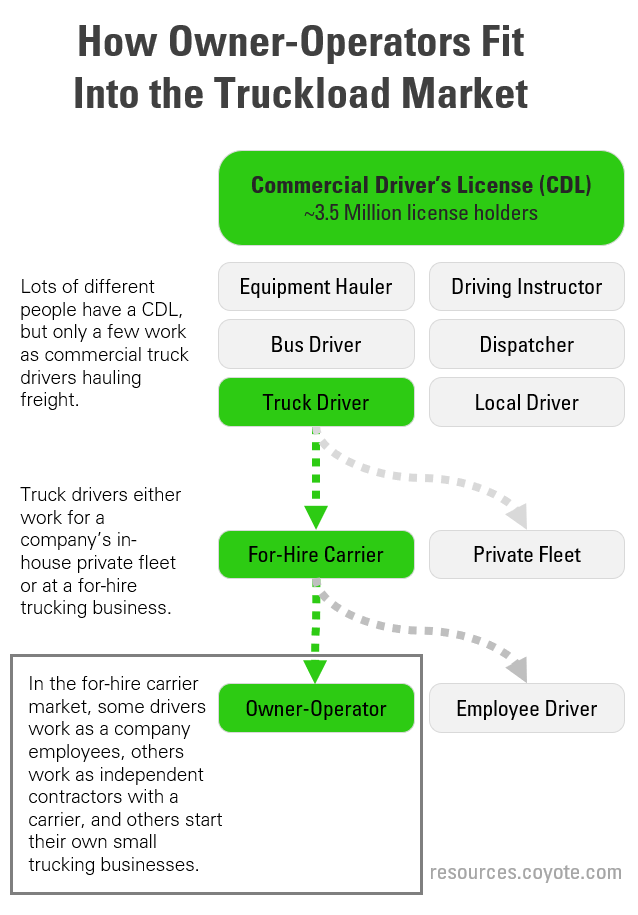 While we don’t have firm data for the precise number of drivers each of these segments employs, we can estimate that there aren’t significantly more than a million drivers working in the for-hire market.

This is due to extreme fragmentation of the for-hire carrier market — 97% of U.S. carriers operate fewer than 20 trucks.

Only some of that total group of drivers at for-hire trucking companies are independent contractors. The rest are full-time employees of a motor carrier, also called "employee drivers."

Core Characteristics of an Employee Driver

Truckers who choose to be full-time employees typically do so for one of several major reasons.

They may not own a truck and need to drive one owned by their employer, they might want the stability of a regular salary and full-time benefits like health insurance, or depending on their employer and/or seniority, they may be paid quite comfortably.

So who are owner-operators then?

“Owner-operator” is actually a fairly broad umbrella term that covers different ways drivers who own their own equipment can choose to work.

In fact, it is such a general term that the FMCSA does not even choose to define it.

All owner-operators in the current trucking labor market share one thing in common, however. They are all independent contractors who sell their services directly to shippers and/or lease their equipment and services to a motor carrier company.

As independent contractors, they are both drivers and business owners. This can mean they are a team of one booking loads and driving their own truck.

However, they also might serve as both drivers and dispatchers, working in the field themselves but also managing loads for a few other drivers who operate under their authority.

What is an owner-operator?

A truck driver who has (at least some level) of ownership over their business while simultaneously operating a truck.

They sell their services directly to shippers and/or lease their equipment and services to a motor carrier company.

While there are many subtle distinctions between different owner-operators, we can point to two main ways in which they can do business.

1. Owner-operators can duly lease their truck and services to a motor carrier.

Drivers who go this route typically do not have their own motor carrier authority granted by the DOT. This means they cannot operate fully independently from a motor carrier company.

Even though they are not technically employees of the motor carrier they lease their services to, they typically have the following characteristics:

One major reason independent contractor truckers go this route is because they may be having difficulty qualifying for owner-operator insurance. If that is the case, they can be covered under a motor carrier’s policy by agreeing to drive exclusively for them.

2. Owner-operators can function as for-hire motor carriers themselves.

These are the true independents. These business owners hold their own DOT motor carrier authority and operate as their own business entity.

When someone says “owner-operator,” this class of business owner is usually what they have in mind. While it may refer to the more recognizable “one truck, one driver” model, it can also describe driver-dispatchers for small fleets.

Because they are incorporated on their own as motor carriers, these drivers:

Going the fully independent route has some appealing freedoms but a lack of security.

While these drivers are free to set their price and choose their time and location of work, they are also responsible for securing their own health insurance and paying their own business expenses.

How do owner-operators find loads?

Whether or not owner-operators are contracted with motor carriers determines how they go about finding work. There are three main methods they can use to source loads.

1. They can find loads through lease agreements with motor carriers.

Because the motor carrier they work with has sole rights to their services, they will typically connect them with loads to move.

However, because they are independent contractors rather than employee drivers, these owner-operators have the ability to choose which loads they want and decline ones they don’t.

2. They can bid on loads independently on digital load boards.

Load boards are open marketplaces where shippers post loads they need to move and carriers bid on them. Popular load boards include the DAT, Internet Truckstop and Getloaded.com.

Owner-operators who are their own for-hire carriers use this method, as the responsibility of finding loads is in their hands.

3. They can work with 3PLs/brokers to find loads.

Many owner-operators who have their own motor carrier authority are also vetted carriers in third-party logistics providers' (3PL) carrier networks (aka freight brokers). These 3PLs match owner-operators with available loads from shippers.

Going through a 3PL combines the independence of going it alone on a digital load board with the perks that come with working with experienced logistics professionals. 3PLs help drivers find backhauls, negotiate rates and optimize routes to minimize dead miles.

Important note: 3PLs do not employ drivers. They contract with independent motor carriers.

What impacts the number of owner-operators in the truckload market?

Supply and demand cycles in the truckload market are the biggest determinant of the number of owner-operators driving at a given time.

When tracked in terms of year-over-year inflation, the truckload market is cyclical. When the market is tight and demand for coverage is outpacing supply, rates will rise.

When this happens, more capacity will enter the market — carriers will order more trucks and hire more drivers, and equipment owners who may have been doing other work will get their trucks back on the road.

However, as the market turns deflationary and rates dip, owner-operators may seek work elsewhere. It’s not uncommon for drivers to park their trucks and take jobs in construction or another blue-collar industry during these periods.

Is the independent contractor classification for owner-operators in danger of changing?

The short answer is “maybe”: California Assembly Bill 5 (AB5) might overhaul the way drivers are classified in that state, and it could have implications down the line for the national owner-operator picture.

This law would reclassify all owner-owners who lease their equipment and services to motor carriers based in the California as employees. It has withstood legal challenges in California and in the U.S. District Court of Appeals and is currently in front of the U.S. Supreme Court for a final one.

Read this AB5 deep dive for a timeline of the bill’s passage and a closer look at its potential impact.

If AB5 does eventually go into effect for truck drivers, owner-operators will have to choose whether to seek employment with a carrier or become fully independent for-hire carriers themselves.

And if that happens, don’t be surprised if other states follow suit with similar legislation — or if we see a new worker classification law passed at the federal level.

Get the most up-to-date truckload market projection with the Coyote Curve.

The Coyote Curve® quarterly truckload market forecast is the place to find how rates are trending year-over-year, how they are being driven by supply and demand indicators, and what capacity could look like in the coming months.