The Office of the Secretary of Defense has recognized SVP of Modal Solutions Michael Sinkovitz for his role in enabling a team member to serve in the Navy Reserve.

Michael has won the 2021 Patriot Award, given annually to a boss or supervisor who demonstrated outstanding support for the dual obligations of a Guard or Reserve member’s military and professional careers.

In September, Bob Nachman, Area Chair of the Illinois Employer Support of the Guard and Reserve (ESGR) presented the award. 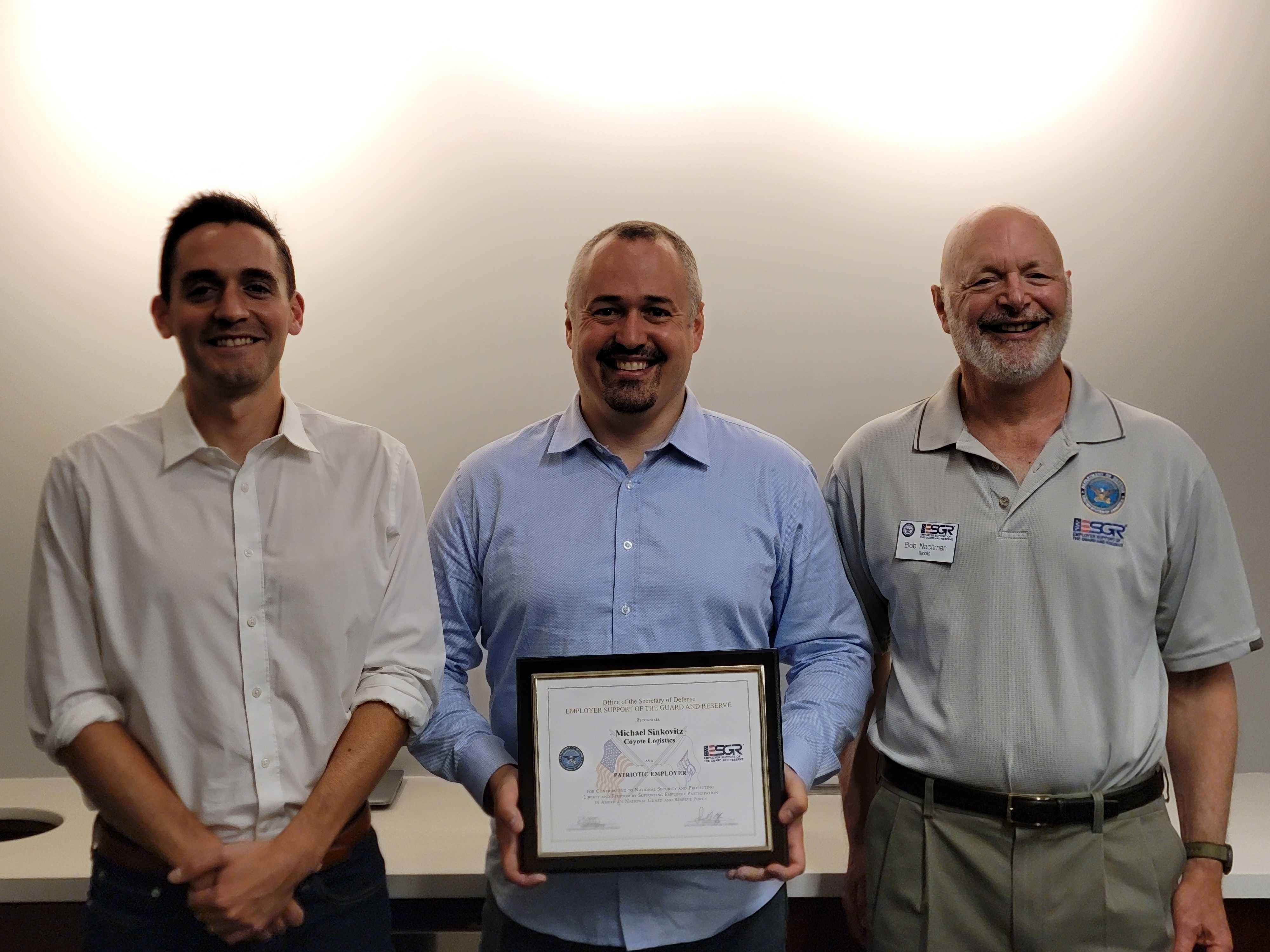 Jack Gerstner, Coyote’s SVP of Coverage, nominated Michael for this honor to reward him for his accommodating approach to management.

Michael’s leadership enabled Jack to fulfill his service obligation without deprioritizing his own professional development.

Support in the Workplace, Support for Service

Michael’s award acknowledges the extraordinary lengths to which he went to enable Jack to handle his responsibilities seamlessly.

Employer Support of the Guard and Reserve (ESGR) presents the Patriot Award to recognize the efforts made to support citizen warriors through a wide-range of measures including flexible schedules, time off prior to and after deployment, caring for families, and granting leaves of absence if needed. 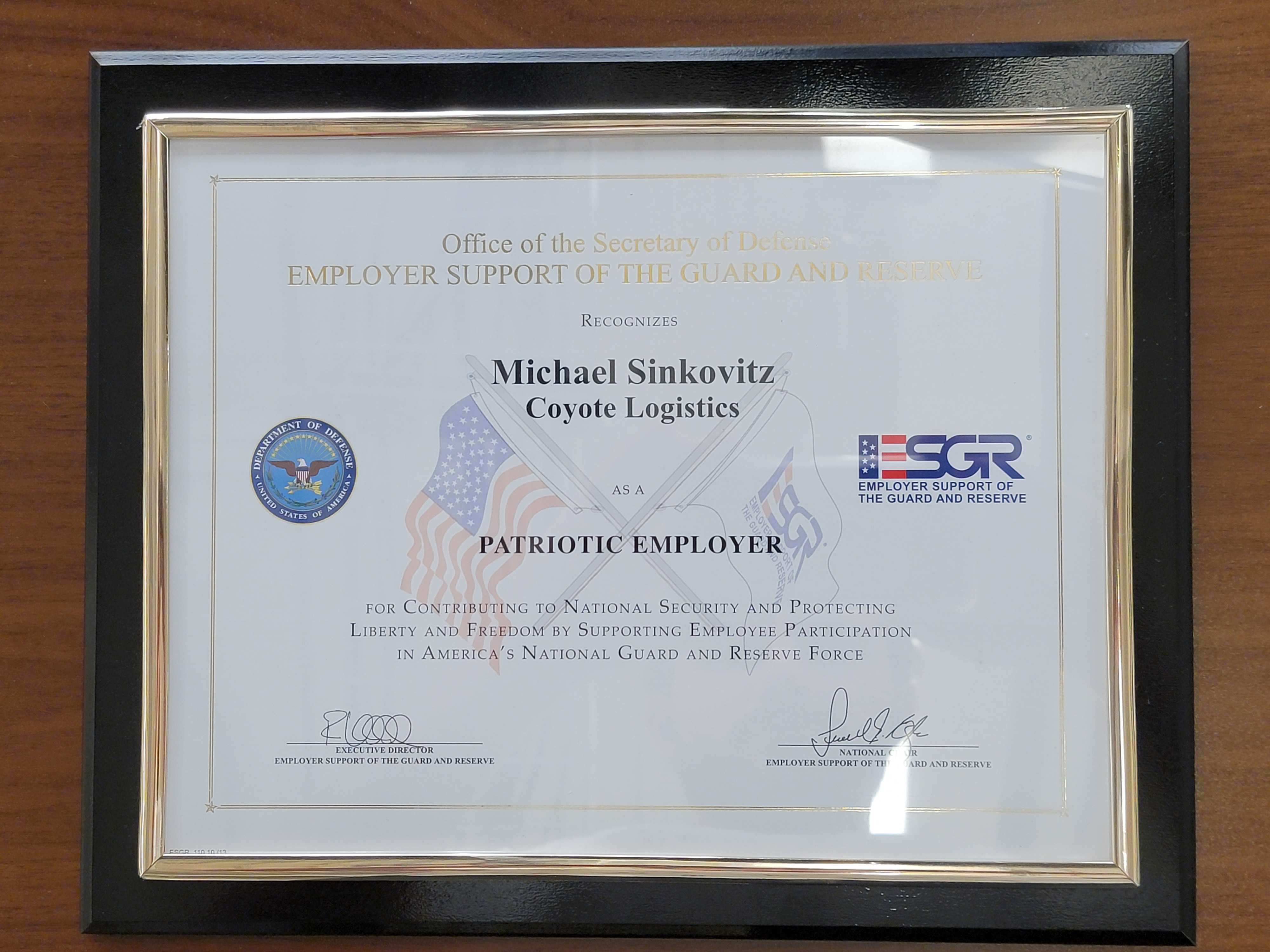 According to Jack, Michael displayed each of these attributes to an extraordinary degree: “Simply put, Mike made it possible for me to fulfill my dream of serving my country. He played a critical, supportive role in facilitating my entry into the Navy Reserve in addition to implementing staffing support to ensure the business didn’t miss a beat while I was on orders.”

“Coyote understands the importance of supporting our citizen soldiers and goes to great lengths to facilitate a workplace supportive of Reservists and Veterans.”

Michael’s efforts while Jack reported to him went beyond the simply administrative. “He also checked in on me from time to time while I was away,” describes Jack, who credits Michael’s level of personal investment for, “providing me with a welcome connection to things back home.”

On the whole, Jack wants to thank Michael for enabling him to pursue a deeply meaningful mission. “I joined the Navy Reserve to give back to a country that has given so much to me and my family,” Jack recalls. “I felt that I needed to do my part, and the Navy Reserve provided me with an avenue to serve while continuing to be a husband, father and leader at Coyote.”

Strengthening Coyote and the Country Together

The choice to accommodate Jack’s desire to serve was hardly a choice at all for Michael.

“I’m very appreciative of Jack’s commitment to our nation and could not imagine a scenario where we would not support this vocation,” he says.

Michael viewed the effort he put into creating a flexible environment for Jack as beneficial to both Coyote and the military in equal measure.

“Jack’s service will assuredly help him develop skills that he will apply in his career,” Michael notes, but he adds that “it is also critical that people with Jack’s proficiencies are empowered to make an impact on our armed forces.”

“As an organization, it is critical that we support our employees’ goals and development, whether within or outside our walls.”

To Jack, Michael’s flexible approach to management is emblematic of a positive culture of support throughout the broader Coyote organization.

“Coyote provides a flexible work environment that makes military service possible,” Jack says. “Coyote understands the importance of supporting our citizen soldiers and goes to great lengths to facilitate a workplace supportive of Reservists and Veterans.”

Michael concurs, and he’s delighted to work toward strengthening the team through every possible channel. “As an organization, it is critical that we support our employees’ goals and development, whether within or outside our walls.”

You can learn more about how ESGR helps position Guard and Reserve members for success by educating both Service members and their civilian employers.

If you think you may want to pursue a vocation to serve your country without disrupting your personal life or professional growth, find out more about the US Navy Reserve.

And if you’re interested in a career with a logistics leader who values service, commitment and giving back, take a look at our current openings at Coyote.